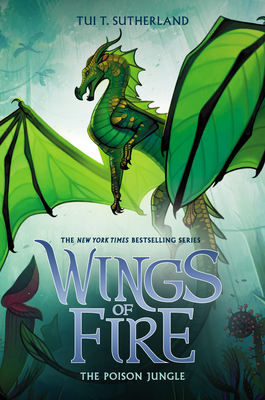 The New York Times bestselling series continues with a thrilling revelation -- brand-new tribes of dragons!
Some secrets are deadly.

It's no secret that Sundew wants to destroy the HiveWings. It's her life's mission to exact revenge on the tribe that tried to wipe out the LeafWings and ripped every tree from the surface of Pantala.

Every tree, that is, except the wild and dangerous Poison Jungle, where the surviving LeafWings have been hiding since the war. Hiding, plotting, and waiting for a dragon like Sundew, who is uniquely qualified to bring down the Hives.

There are dark secrets in the jungle, though-some that Sundew is keeping, and some that she's only just beginning to discover. And now that a new war is upon them, Sundew and her friends must unearth the oldest secret in the jungle-even if what they find has the power to destroy them all.

Tui T. Sutherland is the author of the New York Times and USA Today bestselling Wings of Fire series, the Menagerie trilogy, and the Pet Trouble series, as well as a contributing author to the bestselling Spirit Animals and Seekers series (as part of the Erin Hunter team). In 2009, she was a two-day champion on Jeopardy! She lives in Massachusetts with her wonderful husband, two awesome sons, and two very patient dogs. To learn more about Tui's books, visit her online at tuibooks.com.

Praise for The Lost Heir (Wings of Fire, Book Two):

"[A] perfect adventure for young fantasy fans to sink their teeth into." -- School Library Journal


Praise for The Dragonet Prophecy (Wings of Fire, Book One):

"Dramatic battle scenes, double-crosses, and one seriously deranged queen makes
Wings of Fire a series that should have broad appeal for middle-grade fantasy
fans." -- Booklist

"Fast-paced and detailed, this first installment in a new adventure series is
entertaining." -- Kirkus Reviews

"Readers of all ages will be enchanted by the humanistic storyline and the
page-turning excitement." -- Library Media Connection